Sohmeng Par is sick of being treated like a child. Ever since a tragic accident brought her mountain community’s coming-of-age ritual to a halt, she’s caused nothing but trouble in her impatience to become an adult. But when she finally has the chance to prove herself, she’s thrown from her life in the mountains and into the terror of the jungle below.

Cornered by a colony of reptilian predators known as the sãoni, Sohmeng is rescued by Hei, an eccentric exile with no shortage of secrets. As likely to bite Sohmeng as they are to cook her breakfast, this stranger and their family of lizards are like nothing she’s ever seen before. If she wants to survive, she must find a way to adapt to the vibrant, deadly world of the rainforest and the creatures that inhabit it—including Hei themself. But Sohmeng has secrets of her own, and sharing them could mean losing everything a second time.

Order from your favourite independent bookstore, Barnes & Noble, Indigo/Chapters, or on Amazon! Reviews are the lifeblood of indie books, so if you’ve read Two Dark Moons, it would mean the world if you dropped a review somewhere like Goodreads or Storygraph.

Sohmeng Minhal is going to fix the world. With her home still in jeopardy, she doesn’t have much choice. What she does have is Ahnschen, an endearing prince of the dangerous empire that is disrupting the sãoni migration route. If she can convince Hei to trust him long enough to safely return him to his people, Sohmeng might just have a chance of restoring balance to Eiji. That is, until an unexpected piece of her past emerges from the jungle and challenges everything she is trying to achieve.

Now, the future of Eiji rests in Ahn’s hands—but does he have the courage to face the harm inflicted by his people? Determined to do right by the beloved friend who died on his sword, it will take a lot of unlearning to prove to Eiji—and to Hei—that he can, in fact, be good.

In the second chapter of the Sãoni Cycle, Sohmeng, Hei, and Ahn must reconcile their places in the human and natural worlds, all while navigating their complicated feelings about one another.

Order from your favourite independent bookstore, Barnes & Noble, Indigo/Chapters, or on Amazon! Reviews are the lifeblood of indie books, so if you’ve read Three Seeking Stars, it would mean the world if you dropped a review somewhere like Goodreads or The Storygraph. 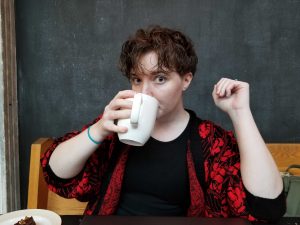 Questions? Concerns? Requests for a duel? I’m best reached by email and am most active on twitter!

Avi Silver is a speculative fiction author (Sãoni Cycle), the Co-Editor-in-Chief of Augur Magazine, and a Rhysling-nominated poet. Find their short fiction in Common Bonds: An Aromantic Speculative Anthology and the forthcoming Nothing Without Us Too. Their poetry has been published in Strange Horizons and Uncanny Magazine. In 2018, they co-founded The Shale Project, an award-winning indie arts collective, and have not stopped worldbuilding since. They are currently working on their first full-length book of poetry, funded by the Canada Council for the Arts. For more information, visit mxavisilver.com. For lizard pictures, follow them on Twitter @thescreambean.